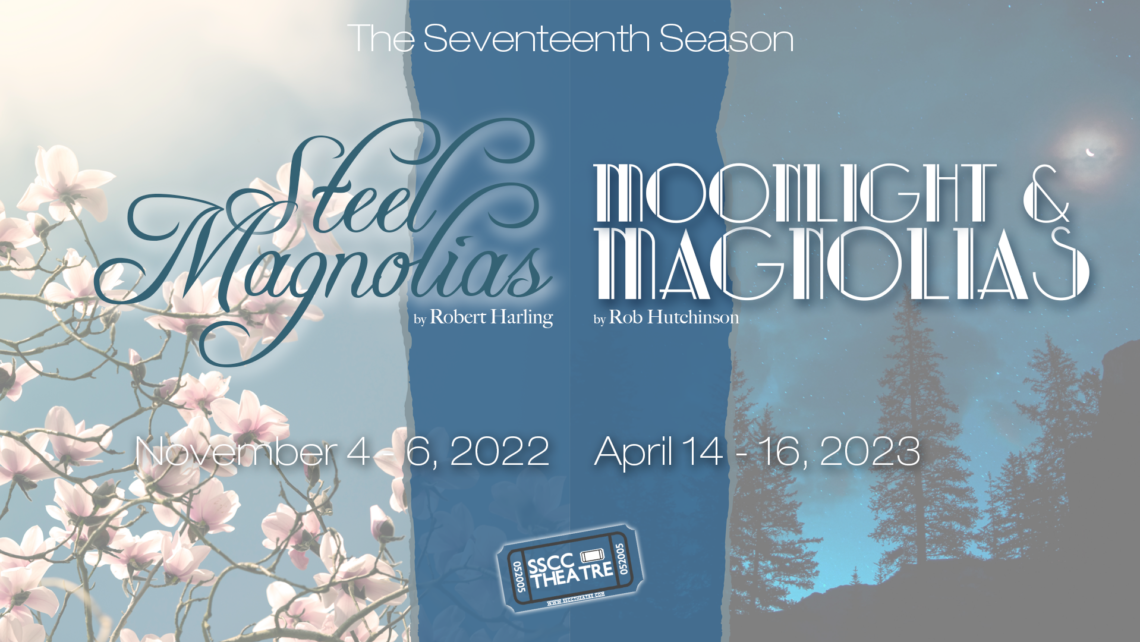 SSCC Theatre is pleased to announce their upcoming 17th, 2022-2023 season, including Steel Magnolias, playing November 4-6, 2022. Moonlight and Magnolias will appear in the spring, playing April 14-16, 2023. Both productions will be presented in the Edward K. Daniels Auditorium on Southern State Community College’s Central Campus, 100 Hobart Drive, Hillsboro.

Steel Magnolias, by Robert Harling, is set in Truvy’s beauty salon in Chinquapin, Louisiana, where all the ladies who are “anybody” come to have their hair done. Helped by her eager new assistant, Annelle (who is not sure whether or not she is still married), the outspoken, wise-cracking Truvy dispenses shampoos and free advice to the town’s rich curmudgeon, Ouiser, (“I’m not crazy, I’ve just been in a bad mood for forty years”); an eccentric millionaire, Miss Clairee, who has a raging sweet tooth; and the local social leader, M’Lynn, whose daughter, Shelby (the prettiest girl in town), is about to marry a “good ole boy.” Filled with hilarious repartee and not a few acerbic but humorously revealing verbal collisions, the play is at times touching and funny.

Moonlight and Magnolias, by Ron Hutchinson, takes place in 1939 when Hollywood is abuzz. Legendary producer David O. Selznick has shut down production of his new epic, “Gone with the Wind,” a film adaptation of Margaret Mitchell’s novel. The screenplay just doesn’t work. So what’s an all-powerful movie mogul to do? While fending off the film’s stars, gossip columnists, and his own father-in-law, Selznick sends a car for famed screenwriter Ben Hecht and pulls formidable director Victor Fleming from the set of “The Wizard of Oz.” Summoning both to his office, he locks the doors, closes the shades, and on a diet of bananas and peanuts, the three men labor over five days to fashion a screenplay that will become the blueprint for one of the most successful and beloved films of all time.

The season of “magnolias” was chosen with specific intent, as the magnolia flower symbolizes perseverance, endurance, and strength – traits we’ve all embodied since COVID shut down our theatres. But we are back and stronger.

Plans are also in the works for SSCC Theatre Company to produce a one-act production during the summer of 2023, more details available soon. To stay up to date on when tickets go on sale, or when auditions will be held, please regularly visit www.sscctheatre.com